Bush walked out of the torture rooms of Auschwitz in 2003 visit, where his grandfather Prescott sold Thyssen's coal to burn Jews, and said "History shows us what is possible" and proceeded to order waterboarding.

TABLE of Interlocked Directors. AIC is the parent of AIG whom brought down the USA economy in the last months of the G.W. Bush administration in 2008. UNION BANKING CORPORATION was Fritz Thyssen's NYC Bank financing the rise of Hitler from the time the Walker-Bush's got involved. AMERICAN SHIP AND COMMERCE CORPORATION,(SHIPPING, HAMBURG-AMERIKA) transported Gold Bullion to Germany from Wall Street to finance the overthrow of Germany and returned "world's without end" tons of Nazi propaganda to the USA after Hitler became chancellor. Silesian-American Corporation was the holding company which controlled the Thyssen coal interests in Auschwitz which sold coal to the prison camps for electric power and to burn jews in the oven. Prescott Bush administered Silesian-American Corporation until 1942, 8 months after Pearl Harbor when it was confiscated along with a total of 26 known nazi companies controlled by Prescott Bush at 39 Broadway, across the street from 26 Broadway (Exxon) Standard Oil headquaters offices of Percy Rockefeller, and next door to earlier 25 Broadway headquarters of Remington Arms. 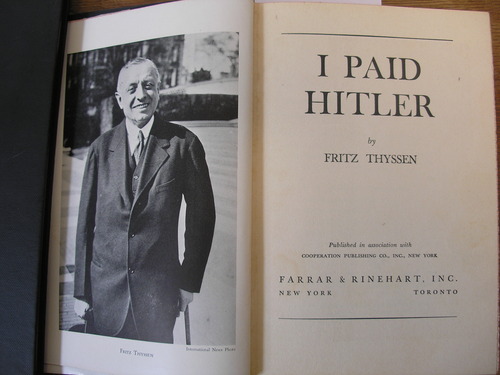 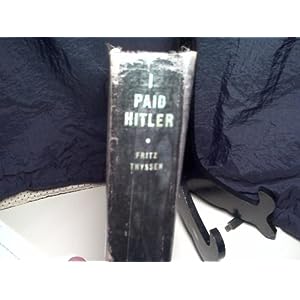 Fritz Thyssen followed Hitler and funded his rise to power. Shown together here in a famous photo, Thyssen contributed millions out of his own pocket and used Prescott Bush's Union Banking Company front operation to funnel another 32 million dollars (back during the depression when millions were REAL MONEY) from Wall Street fascists to Germany to buy arms and pay brownshirt thugs salaries. Some of the gold and arms were transported on Hamburg-America Shipping Lines vessels guarded by Hitler's elite personal bodyguards. The same ships imported tons, "world without end" of propaganda into the US to delay to oppose the US entry into the war. Prescott Bush's father-in-law (George Walker Bush's namesake) and his boss Harriman, and Rockefeller-man Remington Arms-boss Samuel Prior were all controlling directors of 39 Broadway-based Hamburg-America lines.

Not only did Bush-Rockefellers learn from history what was possible -- they created the history that made it possible in the first place. ...And they keep creating it as recently as this past decade.


View Merchants of Death in a larger map

Posted by Mistress Liann at 3:22 PM